HAVANA, August 23 (EFE)  Legendary Cuban ballerina and choreographer Alicia Alonso says the passage of time has not quelled her desire to dance, noting that ballet has been her “entire life” and is as vital to her as “eating and breathing.”

“I always have a desire to dance and now more than ever. The more time goes by, the more desire I have. I dance like crazy because I’ve danced since I was nine years old. Dance has been my entire life,” the 95-year-old Alonso told EFE in an interview at her office at Havana’s Cuban National Ballet, which she has headed since 1948.

Alonso is currently directing rehearsals ahead of her company’s upcoming tour of Spain, where it will put on performances of “Swan Lake” and “Don Quixote,” among other productions.

She recalled her affection for that Iberian nation, a country she began visiting with her family as a young child and where her passion for dance first took root.

“The first thing of dance I learned was Spanish dance, with castanets and everything. I loved it and I still do,” Alonso said.

She said that even as a young girl her desire was to “put on pointe shoes and dance classical ballet,” adding that she insisted on pursuing that dream even though when her career began to take off in the United States in 1938, with appearances in several Broadway musicals, she was advised to dance rumba.

Undaunted, Alonso joined New York’s American Ballet Theatre in 1940 and began a career that led to her becoming a principal dancer with that company and later being recognized with the rare title of prima ballerina assoluta.

Asked about the new stage of relations between Cuba, her “beloved” homeland, and the United States, where she cemented her place as an elite ballerina, Alonso said she hopes that the two nations continue to strengthen their bilateral ties and promote more cultural exchanges.

“If cultural exchanges are facilitated, we’d be more than happy and satisfied to tell them (the Americans) yes. We’d like to visit the United States soon with the Cuban National Ballet. We have great friends there,” she said.

Alonso, with the help of an assistant, continues to direct the company’s dancers at morning rehearsals, giving clear instructions about every step in the choreography despite vision problems that have afflicted her since she was a teenager.

“You can never be satisfied with how you dance. You always have to push yourself further and further.
The human body has to be made to do more,” Alonso insisted. 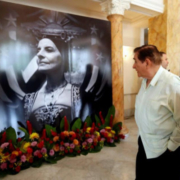 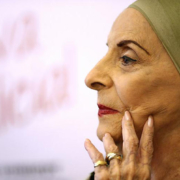