The French-made ATR 42- aircraft arrived with 42 passengers at the Norman Manley International Airport and was greeted by the traditional water arch, symbolizing the baptism of the inaugural flight. 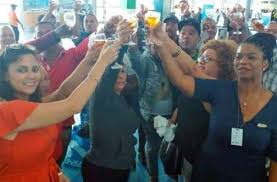 During the celebration, representative of the airline in Jamaica and director of the Caribbean Latin Travel Consultant Ltd TravelAgency, Yeni Larrahondo, recognized the support given by the Jamaican aviation authorities that allowed the connection between both Caribbean cities.

The aircraft will fly the route every Thursday.

There are other flights from the Cuban cities of Havana, the capital, Santiago de Cuba, and Holguin to Kingston and Montego Bay.

According to the UN, Cuba ranks 72nd on human development index
Scroll to top