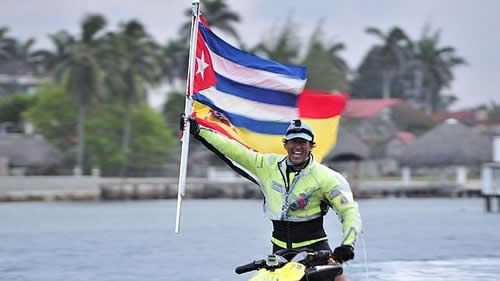 HAVANA, Mar 9. The Spaniard Álvaro de Marichalar on his journey through Cuba, as part of the circumnavigation of the world in homage to that initiated by Fernando de Magallanes in 1519 and concluded by Juan Sebastián Elcano in 1522, travelled alone aboard his jet ski on the main spa of this municipality Camagüeyano.

In the beginning, his visit was planned at the end of February but it was finally this Thursday, March 5.

“Numancia (name of the vehicle) passes through the protective waters of Saint Lucia, inside the barrier at 3:30 p.m. the brave and lonely traveller travelled. Very close to the coast, on foot and at full speed, the intrepid Spanish on Cuban lands continues to Havana. Leave a transcendent fact in nautical history, he could not visit us but I hope he has taken full advantage of our guardian of the waves: one of the most extensive barriers in the world in northern Camaguey, ”you can read in a Facebook profile post-Nautical Marlin in the mentioned place.

According to the note of the Hemingway International Yacht Club of the Caribbean nation, Marichalar fulfilled this route the third stage of his trip along the north coast of the Antillean nation until he reached Cayo Guillermo, in the central province of Ciego de Ávila.

The travel program included the renowned resort of Varadero to finally play this Saturday, according to the schedule, the Marina Hemingway of Havana.

“Recall in Cuba is very important in this journey because it means honouring a sister land, like all Latin America but perhaps more, for the temporary proximity,” said the navigator and Navarre businessman of 58 years and shared the agency EFE.

Marichalar arrived in the afternoon of last Monday, from Haiti to the city of Baracoa, in the province of Guantanamo, where he was received by José Miguel Díaz Escrich, Commodore of the Hemingway Marina.

The Spanish sailor makes the journey alone, which began last August 10 in Seville. The particular tour of the world will take approximately two and a half years, Marichalar said.

Before arriving at the Cuban archipelago, he visited Guadalupe, Saint Barthélemey, Saint Croix, Puerto Rico, Dominican Republic and Haiti, according to the Prensa Latina agency.

After completing the crossing through the largest of the Antilles, you will continue your trip to the United States and then to Mexico, Belize, Guatemala, Honduras, Nicaragua, Costa Rica and Panama.

In the latter country he will continue to Alaska, then Russia, Japan, China and the Philippines to end up touring the rest of Asia before entering the Mediterranean to Seville, according to the EFE agency.

Is the monetary unification’s Day 0 approaching?

How to be worthy when facing the blockade?
Scroll to top